At the moment we split up the calculation/propagation of some of the quantities (e.g. laser beams or clock noise) into an offset and an fluctuation part. The important properties of them are:

We should probably think about doing that more consistently throughout the simulator. Examples are some of the noise processes that have spectral shape that diverge at f -> 0Hz. For long simulations those noise time series can blow up in terms of numerical value. This has the disadvantages that we lose numerical precision in-band and some of the assumptions might not hold anymore (which is probably even more critical).

A solution could be to treat (all/some more) quantities in a decomposed form. To achieve that we could also contain the out-of-band part of any noise (not only deterministic drifts) in the offset part. This would also mean that any of the computation performed on the total variable need to implement a side-by-side processing of offsets and fluctuations.

As an example, I tried around with integration (cumulative sum), since this operation is numerically unstable and will cause large drifts when applied to white noise. The operation reads:

I the last step I wrote down how to generate the integrated output y[n] from the input x[n] in decomposed form. Here, y^\epsilon[n] is a well behaved time series that does not diverge for long times. 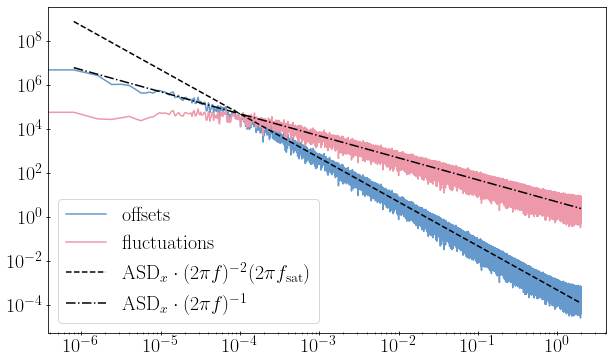 You can see that the cutoff (saturation at around 0.1mHz) is reproduced well in the two components: The offset part accounts for all frequencies below f_\mathrm{sat} and the fluctuation part for all above. There is some mixing though and we need to investigate if this is of any importance...