RegIPSL couples for the moment the IPSL ocean model (NEMO), land surface model (ORCHIDEE) to the WRF atmospheric component. A limited area of DYNAMICO is under development. The general strategy is presented in this section. 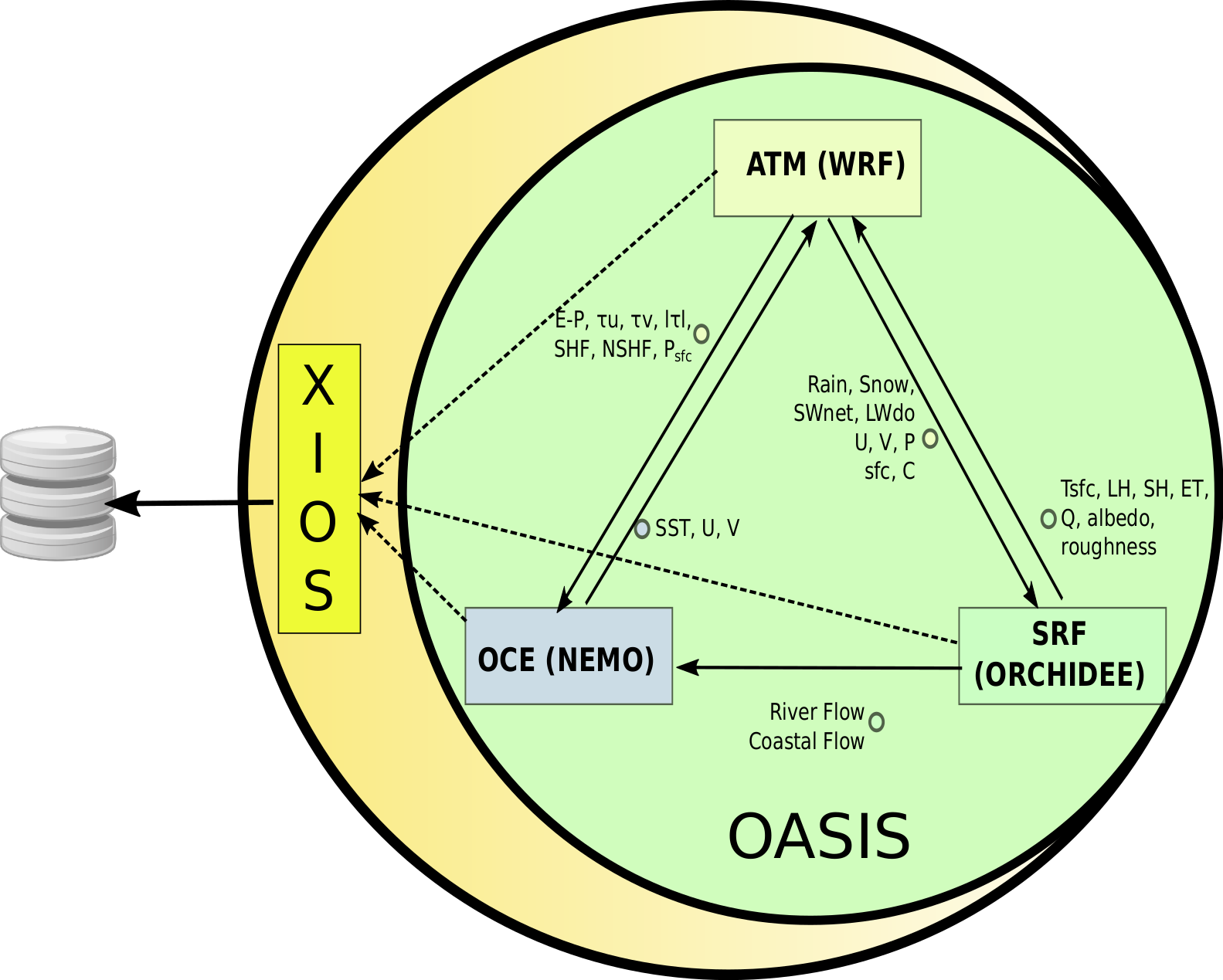 This section covers the documentation of the models which are assembled in this regions Earth system model.

ORCHIDEE is the IPSL land surface model and a dedicated branch is currently being used for the coupling.

The NEMO-MED version used for this configuration of MORCE-MED is based on version NEMO_v3.6_STABLE of the NEMO ocean general circulation model.

The user manual provides technical document for preparing the executable on various machines and all the files needed for a particular configuration.

Pages to provide some advice, solutions or tips in multiple issues that might arise during RegIPSL execution

Reference simulations have been performed over two domains for the moment and are documented here.

This simulation is the Hindcast experiment (ERA-I) performed for the MedCORDEX protocol. The output files will be distributed through ESGF.

Nested within the MedCORDEX domain, we have configured a domain with high enough resolution to allow for explicit convection (3km). A 10 year long simulation exists over this domain.

This corresponds to a hindcast experiment (ERA5) for the SAM-XORDEX protocol.

This section points to additional tools needed in order to prepare various configuration files needed by the components of RegIPSL.

They can be downloaded from the git repository as follows:

This tool prepares the domain of simulation to be suitable for RegIPSL. Avrious modifications have been introduced into WRF's geogrid tool in order to remove all the inland water bodies (lakes, wide rivers) and ensure free sea passages (eg.: Gibraltar, Dardanelle, Maghallanes Strait) in the domains of simulation.

This is necessary in order to avoid disruptions into ORCHIDEE's routing scheme.

This is a tool in order to convert atmospheric circulation data in netCDF (re-nalaysis or CMIP simulations) to the WPS format of the ungrib file (unformtatted FORTRAN) used as lateral boundary conditions for WRF.

This tools constructs the routing network for the horizontal grid on which WRF and ORCHIDEE will run.

This tool constructs the necessary files from a RegIPSL simulation to be used as off-line forcing for ORCHIDEE.

Describes the activities of the scientific team around RegIPSL and provides contacts.

The group which develops the RegIPSL Regional Earth System model meets every Thursday at 16:00 (Paris time) to coordinate the development of the model and the scientific exploitation of the simulations.

These pages are dedicated to issues identified in WRF and ORCHIDEE during the development and validation of RegIPSL2.

Space for the developer of RegIPSL