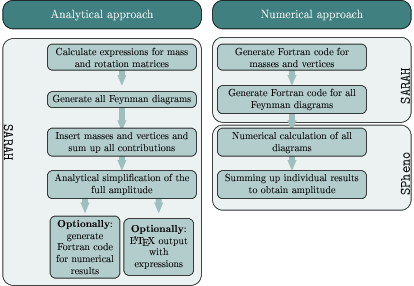 As of version 4.14.0 SARAH is able to compute threshold corrections to scalar and yukawa couplings in effective theories by integrating out all heavy degrees of freedom from a full theory, see the related SARAH paper. There is also a file Example_Matching.nb, located in SARAH's root directory, which contains a comprehensive example of the MSSM->SM as well as MSSM->THDM matching.

The matching of effective couplings consists of the following ingedients:

Thus, effective low-energy couplings can be expressed in terms of high-scale parameters. 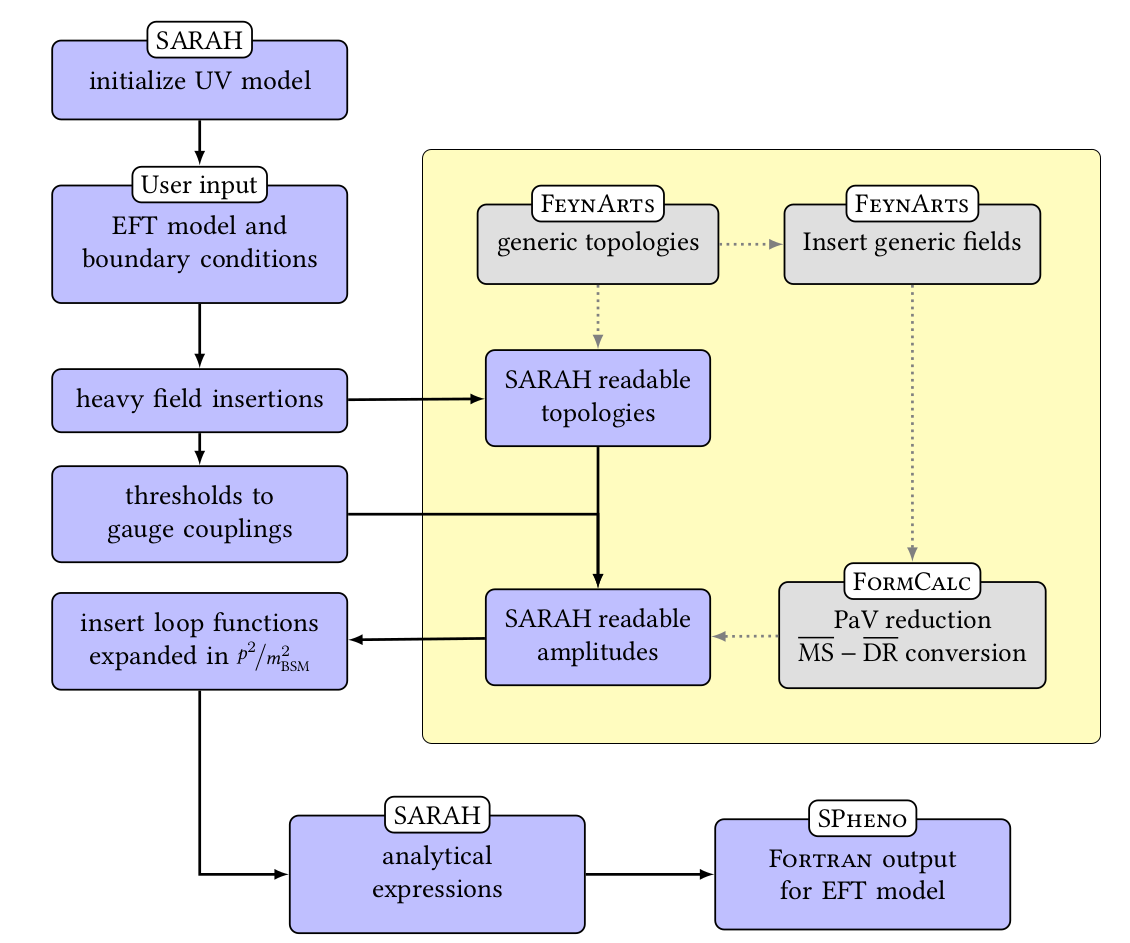 While the #Interactive Mode allows only for the computation of dedicatet effective couplings, the #Batch Mode provides a fully automatized creation of such a SPheno version based on one single steering file.

For the actual computation, the model of the full theory (containing the heavy degrees of freedom e.g. the MSSM), has to be loaded

Then, certain simplifications have to be provided in order to allow for an analytical diagonalization of all mass matrices. VEVs in that are of the order of the electroweak scale have to be neglected, i.e. all fields in the low-energy EFT are assumed to be massless. To do so, put the simplification VEV->epsUV into the parametrisation list described below. epsUV marks dimensionful parameters that are to be neglected during the matching. Do not simply set the VEVs to zero as this causes problems in e.g. the calculation of tadpole equations (division by zero).

To get informations about how to initialise the matching routines type ?InitMatching:

This section assumes that InitMatching was invoked without the InputFile option but with sufficient Simplifications and Approximations such that the analytical diagonalisation was successfull. To check this one can have a look at ?M where the result of the diagonal mass matrices is stored.

As stated above, the interactive mode is not able to generate fully automatized SPheno code. However, certain features are dedicated to this mode to simplify the study of the analytical structer of the different contributions:

this makes it easy to get an impression on how e.g. certain fields contribute and motivates choices for numerical studies including all contributions.

The topologies are described in appendix A in LINK TO PAPER. To get a list of all available topologies and groups of topologies see the list TopoNotation.

If a standard RGE running, matching and mass calculation using SPheno is demanded, the Batch mode described in the next section should be used. However, for the usage of pieces of the calculations obtained in the interactive mode in other programs or custom SPheno versions one can either export the Mathematica expressions or use the function GenerateSelfDefinedFuntion[“MyRoutineName”, ] to generate a Fortran routine. By default, all symbols are assumed to be complex. Ensure to set conj[parameter]=parameter for all real parameters as well as to replace Mathematica symbols (e.g. greek letters, mathematical typesetting etc.) with undefined ones that are compatible with yout Fortran code. 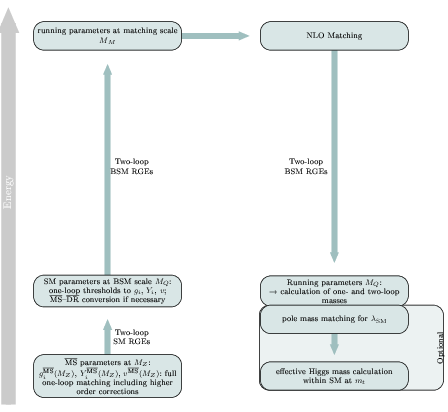 To start the batch mode run InitMatching[InputFile-> “File name located in the directory of the loaded model.”] where the .m file may contain the following information

The option concerning the matching which is new compared to the interactive mode is $MatchingConditions. It defines the matching condition which is applied at the matching scale $SPhenoMatchingScale. The first entry of the replacement list is a coupling in the low-energy theory (in this case of the THDM) while the second one is the corresponding amplitude in the UV-model. The prefactors are due to different normalizations of the fields in the two SARAH models.

The LaTeX options should be self-explanatory. The list AdditionalTeXsymbols should contain all additional symbols which are not defined in the UV-model or haven't got a LaTeX definition yet.

The generated Fortran and LaTeX routines are saved into the output directory of the UV model: $SARAH_Directory/Output/Modelname/EWSB/Matching/$NameUV. While the TeX files can be compiled with any standard LaTex compiler, the Fortran routines contain only the effective couplings but are included during the SPheno generation.

The variables prepended with $SPheno will be used to generate a new SPheno.m and correspond to the usual variables used there. The new SPheno.m will then include the Fortran routines in the $MatchingConditions applied at the scale $SPhenoMatchingScale. The location of the SPheno.m is the directory of the model $SPhenoEFTmodel. It can be used in a seperate Mathematica kernel to make SPheno as usual. 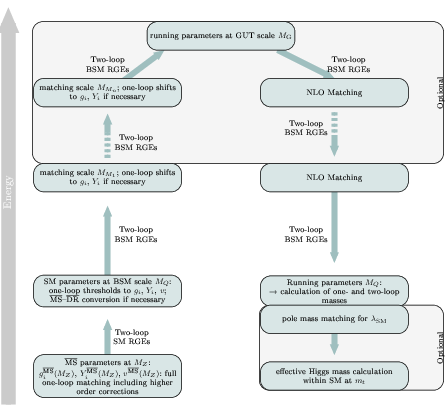 The key difference to the analytical approach is the ability to also compute threshold corrections to Yukawa couplings, necessary for the running above the matching scale. 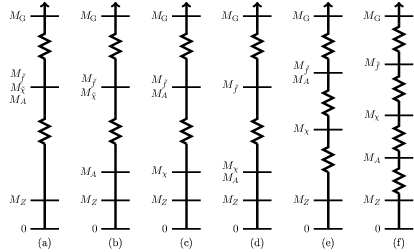