SARAH can calculate two-loop contributions to the self-energies of real scalars. There are two equivalent approaches implemented in the SPheno interface of SARAH to perform these calculations

Because of the very complicated form of the results there is no output of the corresponding expressions in the Mathematic or LaTeX format but the results are just included in the SPheno output. Since both calculations are based on a completely independent implementation and use a different approach they are very useful to perform cross checks. For the MSSM and NMSSM both calculations reproduce exactly the results obtained by widely used routines implemented in other tools. However, for non-minimal SUSY models are no references available to compare with. Thus, the only possibility to cross check the results is within SPheno and comparing the two different methods.

Self-energies and tadpoles from the effective potential in general

We consider a set of real scalars {ϕk} which are diagonalised to physical states {hk}. The scalar potential at tree-level is VT({ϕk}). The pole masses of hi are in general the eigenvalues of the loop corrected mass matrix given by

Here, Π(n)(p2) is the self-energy at the n-loop level which usually depends on the external momenta. The parameters appearing in VT should be chosen to minimise the effective potential. For a pole mass mhi the momentum is fixed to be p2 = mhi2. To include this momentum dependence of Π(n) a diagrammatic calculation is necessary. However, things become significantly easier if one considers the limit of p2 = 0. In this limit Π(n)(0) is equivalent to the second derivative of the effective potential at the n-loop level,

CP-violating is neglected in the following. Therefore, a set of neutral, complex scalars Hi are decomposed after symmetry breaking as

ϕi are the CP-even components, σi the CP-odd ones and vi are the vacuum expectation values (VEVs). Under this assumption, the two-loop corrections to the mass matrix of real scalars in the effective potential approach are given by

In addition, one requires the tadpole contributions which are the first derivatives of the effective potential,

The tadpoles then also contribute to the scalar masses by shifting the parameters; for example if we treat the vevs vi as fixed, “all-loop” correct values, then one can exchange them for scalar mass-squared at a given loop order via the tadpole equations, and in turn find compact equations for the total shift in the mass-squareds of

\big( \Delta \mathcal{M}^2_S \big)_{ij}^{\rm eff} = \frac{\partial^2 V^{(2)}}{\partial v_i \partial v_j} -\frac{\delta_{ij}}{v_i} \frac{\partial V^{(2)}}{\partial v_i }, However, this is not done by SARAH which instead solves the tadpole equations and then uses the parameters derived from these in the tree-level mass calculation. The reason is that SARAHallows for a more general choice of variables to solve for via the tadpole equations. 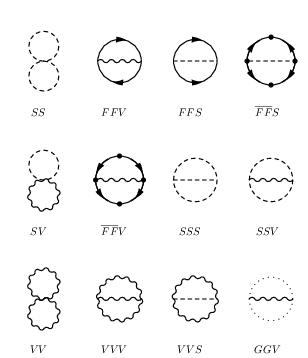 The generic results for all of these diagrams in Landau gauge have been presented in Ref. and SARAH makes heavily use of these results. However, not all topologies are implemented so far but V**V, VVS, VVV, S**V, and GGV are neglected. The reason is that these only lead to non-zero contributions if massive vector bosons are involved. Working in the gaugeless limit, all contributions stemming from broken gauge groups are neglected so far because of the many complications that they entail.

The remaining topologies are those which have been considered so far in the MSSM to obtain the dominant two-loop corrections and which are implemented in public computer tools. The impact on the Higgs mass is considered to be moderate when neglecting contributions propotional to the electroweak gauge couplings in models with the SM gauge sector, since they are significantly smaller than the strong and top Yukawa coupling – and the diagrams involving these couplings are of typically lower multiplicity. In fact, by inspecting the form of the loop functions it is evident that the topologies S**V, V**V, VVV, VVS < mat**h > and < mat**h > GGV lead to contributions proportional to gE**W4v2 < mat**h > where < mat**h > gE**W stands for the electroweak gauge coupling; these are hence subdominant to the contributions from SSV, FFV, \overline{FF}V diagrams involving the electroweak gauge bosons (which we are also neglecting) which would be proportional to gE**W2v2 < mat**h > .Not**e, forconsistenc**y, SARAHalsosetsallgaugecouplingsarisinginth**e < mat**h > D-terms of broken groups in the vertices to zero. The masses used in the loops are tree-level masses calculated from running D**R′ parameters. In this context, there are two possibilities to treat D-term contributions to the tree-level masses: either one can work in the gaugeless limit where these contributions are also put to zero, or one can work with the full tree-level masses as this is also done in diagrammatic calculations. SARAH offers both possibilities. In the gaugeless limit the S**U(2)L × U(1)Y gauge symmetries become global symmetries. Therefore, it is obvious that no gauge dependence has been introduced by including only Goldstone diagrams but no diagrams of the corresponding vector bosons. Of course, when including D-terms in the mass matrices the derivatives of the D-terms are still forced to vanish.

For the calculation of the two-loop effective potential the expressions of Ref. given in two-component notation have been translated into four-component language. All necessary generic expressions have been implemented in SARAH. SARAHuses these expressions to generate Fortrancode for all two-loop diagrams which are possible in the considered model assuming the topologies S**S, SSV, SSS, FFS, \overline{FF}S, FFV and \overline{FF}V.

As soon as the two-loop effective potential is calculated, one can obtain the two-loop corrections to the Higgs mass by performing the derivative to calculate the tadpoles and self-energies numerically. The numerical derivation in SPhenois done by using Ridders’ method of polynomial extrapolation with dynamical step-size. SARAH provides two different methods to perform this derivation:

The second method is numerically slightly more expensive but it is also more stable. In particular, in the presence of large hierarchies in the VEVs the purely numerical method could become inaccurate.

A fully diagrammatic calculation for two-loop contributions to scalar self-energies with SARAH –SPheno became available with Ref. . In this setup a new set of generic expressions is used. The following two-loop diagrams are included in the limit p2 = 0: 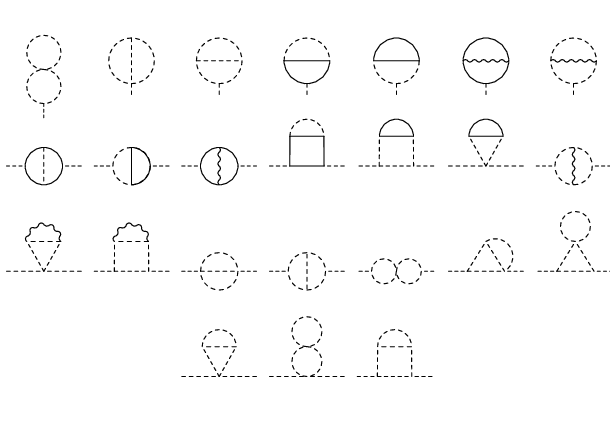 The diagrammatic calculation can also be used to get the two-loop corrections to real scalars which don't receive a VEV and for models with CP violation in the Higgs sector . No modifications are required: for the computation of masses for CP-odd scalars in CP-conserving theories and for models with CP violation exactly the same routines apply because the results of Ref. are given in terms of real scalars, and the CP-odd scalars are just CP-even scalars with different labels.

It is well known that the derivatives of the effective potential in the Landau gauge may suffer from divergences due to massless Goldstone bosons : the derivatives of some loop functions have infra-red singularities. In the gaugeless limit of the MSSM, this problem is circumvented because the masses of the pseudoscalars become independent of the Higgs vevs, and so the derivatives of the effective potential do not contain any singular functions. However, once one goes beyond the MSSM (even to the NMSSM) this problem reappears. The singularities in the first derivative of the potential may be tamed by resummation methods, but the second derivatives may remain singular and it has been suggested that the problem could be resolved by passing to the pole mass calculation instead . However, working in the gaugeless limit this problem is usually not present: as stated above, the tree-level masses entering the calculation are calculated at the minimum of (full) tree-level potential. Thus, using the Lagrangian parameters at this minimum in the mass matrices expressed in the gaugeless limit, the Goldstone masses are usually non-zero and no divergences in the numerical evaluation show up. This is one strong motivation for working in the gaugeless limit: it reduces the dependence of the tree-level Goldstone ``masses'' that enter into the calculation on the renormalisation scale.